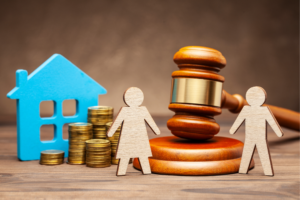 There’s nothing less romantic than planning for the demise of a marriage before the couple even says, “I do.” However, if you, or someone you love, are entering a marriage with assets you have worked hard to earn on your own or that have been gifted solely to you, it is important to understand how that property may be treated and distributed in the event of a divorce.

The unintentional commingling of funds or other acts that change an asset’s characterization from separate to marital can sabotage otherwise careful financial planning. To avoid that, a few proactive steps can help ensure your assets are titled correctly and remain separate property throughout the marriage.

As a resident of Missouri, or any one of our nation’s equitable distribution states, once you are married, your property will be categorized, broadly speaking, as “his,” “hers,” or “joint property.” In the event of marital dissolution, the “his” and “hers” property are set off to him and her, respectively, while the joint property is divided equitably rather than equally.

It is important to know that property acquired or procured during a marriage is generally presumed to be marital in nature. Some exceptions are assets acquired through inheritance, gifts designated to just one spouse, and assets owned prior to the marriage. These are generally classified as separate property as long as there is no commingling or other acts that transmute the character of funds from separate to marital.

The reality of the division of property laws, however, can be quite complex. Depending on the state, any interest and dividends earned during the marriage may be considered marital property regardless of how the account is titled.

In one real-world divorce scenario, wife “Susan” kept a $2 million trust titled in her name alone when she married her husband “Evan.” Susan believed the trust would be protected should she and Evan divorce because his name was never on the trust. However, in Missouri, where Susan and Evan reside, only the $2 million principal was categorized as Susan’s separate property. The income earned on that principal was categorized as marital income.

During the marriage, Susan’s trust account grew from $2 million to $2.7 million from stock dividends, and interest was automatically reinvested within the trust. In addition, Susan deposited $50,000 from the joint checking account into the trust, which further commingled separate and marital funds.

During the divorce proceedings, Evan claimed that the full $2.7 million should be categorized as marital property. He cited the following factors in making this assertion: 1) the use of dividends to purchase new stock, 2) the heavy trading of the account throughout the marriage, and 3) the addition of $50,000 in marital monies. All of which he claimed commingled the account and changed its character from separate to marital property.

The reality is most courts are loath to make determinations on how much of the assets are separate and how much are marital because it can be quite a complex undertaking to trace and separate the assets into their separate and marital components. Unless it is very clear, or you hire a forensic accountant, the court is likely to treat the entire asset as marital.

In Susan’s case, she had to engage a forensic accountant to trace and delineate the marital and non-marital portion of the trust, which resulted in a lengthy and complicated process that could have been avoided with a few proactive steps before their marriage.

Although it may not be romantic, always consult with legal and financial advisors to clarify and protect separate assets rather than banking on the proverbial happily-ever-after. Specifically:

If you find yourself in the unenviable position of fighting over what constitutes marital assets, consider hiring a forensic accountant. That decision can be critical to the outcome of these disputes or similar legal matters. Forensic accountants will use their investigative mindset and skills to trace through transactions to document and explain what is separate versus marital. It may be the best investment you make if it results in your separate property not automatically classified as marital property.

This article is for educational purposes only and not intended to provide legal advice. It is important to consult with an attorney who understands your specific state’s division of property laws as they apply in a divorce.